The search for those special, unique vineyards that will express the best of Rioja is an ongoing task that has its challenges outweighed by its rewards. Time spent walking and visiting vineyards has allowed us to feel its diversity, even more, to perceive that the essence of  Rioja, despite its small size, lies in its diversity of lands, climates, vines, landscapes… and therefore its wines. This is what has given Rioja its name and merit; the blend of this diversity and evolving traditions. 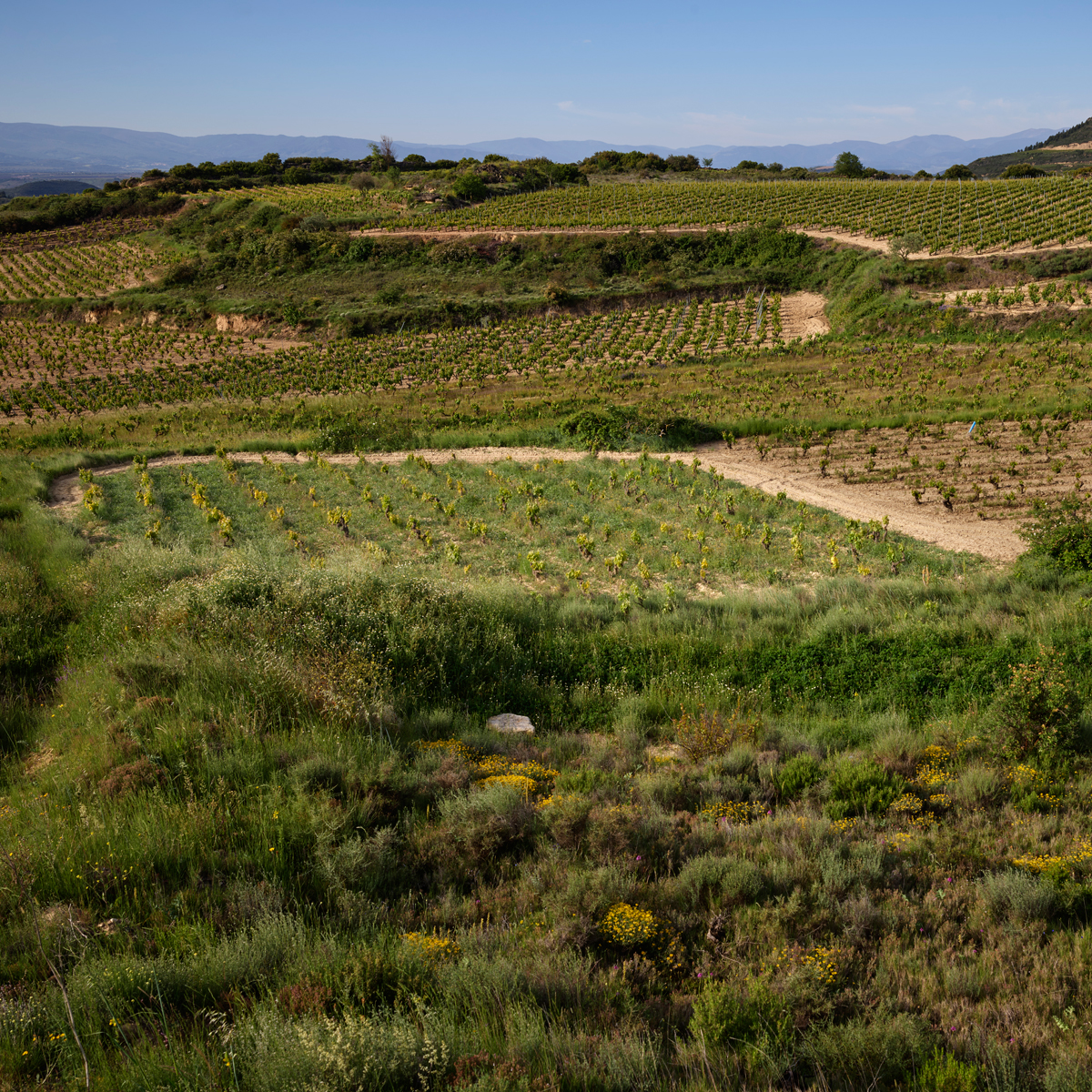 Right from the start, we found four ‘corros’ (circles) in Villabuena (Rioja Alavesa). Small plots, not necessarily round,  but these small plots are known by that name; due to natural circumstances of lack of profitability they usually contain very old plantations (1930-1955), as the cost of replacing the vineyard takes a long time to recover. And even more so in our case, where we should talk more about ‘corritos’ the diminutive than ‘corros’, even with the smallness that the word ‘corro’ (in Spanish) already implies, they add up to a total of some 3,526 square metres, an area which for a South African like Bryan means little more than a flower pot.

It was our first acquisition, ruinous according to the locals, but affordable given its size, and as expected it provides the quality grapes we were looking for. Bryan hopes that one day he will be able to make a wine that comes exclusively from such ‘corros’ – given the diversity of the vines from these old mixed plantations of different varieties – the result will surely be a claret or a rosé, as the wines were made in the past from these old plots with roughly equal percentages of red and white grapes.

Among those heroic vineyards I was talking about, after much searching, we found one that filled us with satisfaction because of its enormous possibilities, although the difficulties of its cultivation were not insignificant – defined as “good place to hide” by one of our visitors. Located in the area of Laguardia, and about 13,000 square metres in size, it was planted in 1935, with the distances between vines typical of the era and the way they were cultivated at that time, by hand and with mules. At the same time fruit trees were planted to complete the family’s appetite. We have counted up to 32 different trees. It is a very steep slope with a very abrupt scarped eastern facing edge from which a stream called San Ginés flows; that is why the property is known as BARRANCO DEL SAN GINÉS (del and not de, because the vineyard is named after the stream – San Ginés. Barranco is spanish for a steep scarped slope or ravine and hence we named the wine we obtain from this slope facing this stream – Barranco Del San Ginés.

Since 2017, this vineyard has been classified as a Viñedo Singular (Single Vineyard), which is a new category of the DOCa of Rioja, which aims to identify those vineyards, due to their geographical, climatic and genetic characteristics have a special ‘terroir’ and are a guarantee of very special wines and quality. 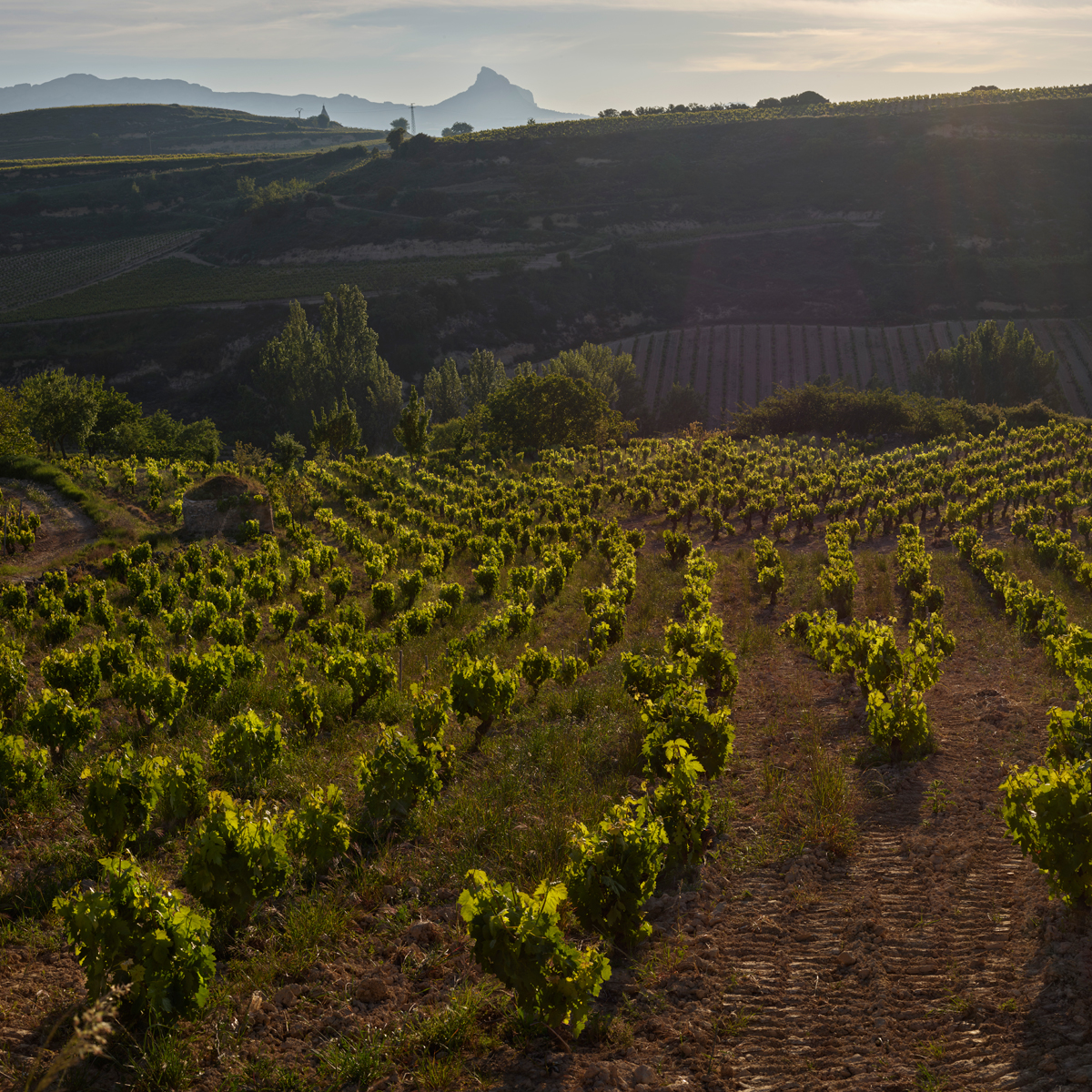 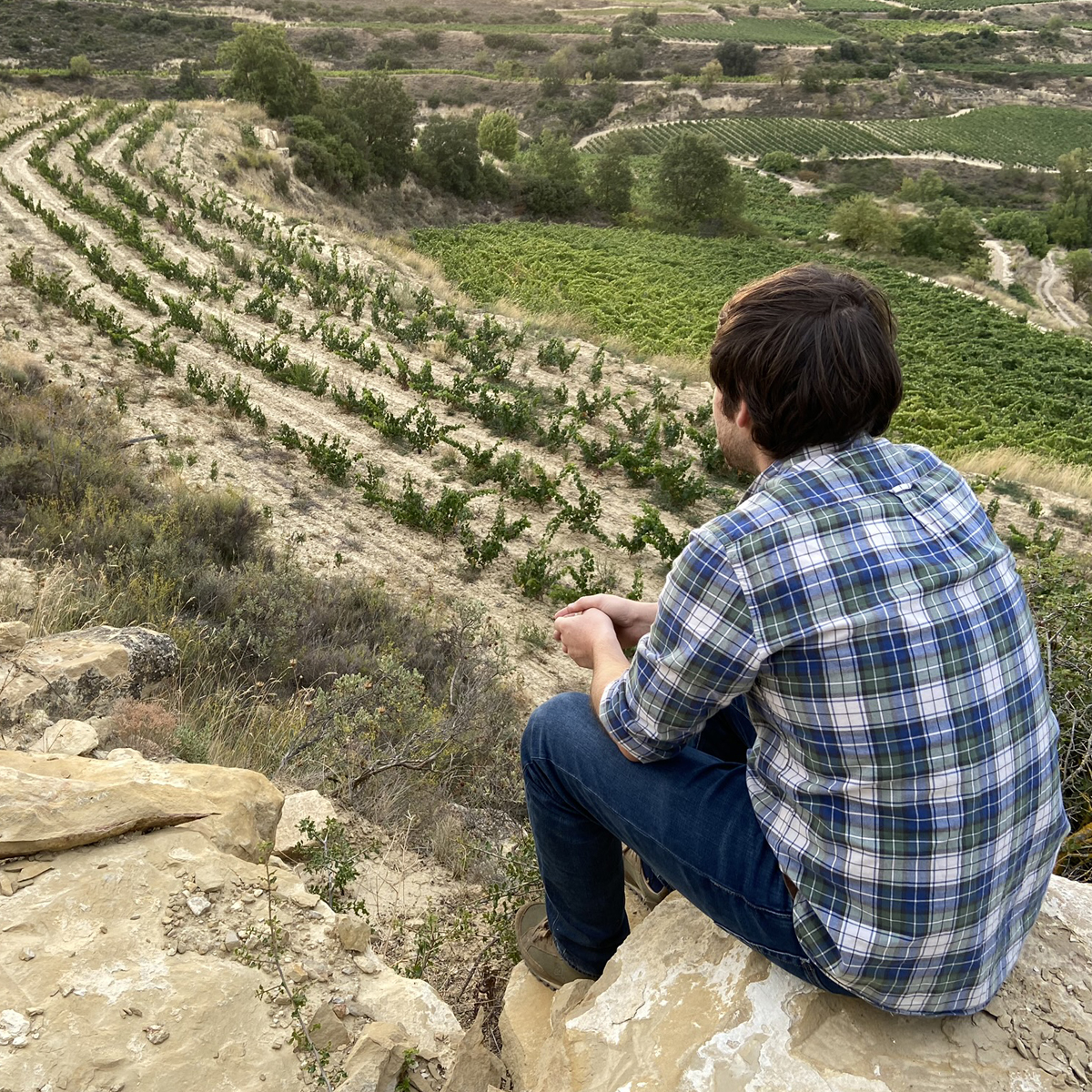 The Ravine (or Barranco) is located in a place known as Viurco or Biurko, which means between two rivers, the first is the already mentioned, the second is San Julián.

On the outskirts of the Barranco, precisely on the other slope that faces the San Julián River and towards the South, we have acquired a piece of land of about 4,700 square meters formed by three terraces where we have planted the Graciano grape variety. This is a variety of grape from which we hope to obtain freshness and acidity in its youth for the blend of La Nave and perhaps in the future become a very special monovarietal or even a Viñedo Singular.

To the south of Laguardia you can enjoy a wonderful view of the village with the Sierra de Cantabria in the background, often covered with a cloud that is formed by the so-called cierzo, a cool north-west wind that forms these clouds that overhang the peaks but never dares to enter the plain. We familiarly call it the wave or ¨Ola¨ in spanish; also technically it is known as föhn.  In South Africa it depicts the ¨tablecloth¨ that rolls over Table Mountain. Here we have acquired a series of small plots of land very close to one another. Verdecillo is the name of the site.  Here Bryan has taken out a mortgage to buy his first vineyard – naturally, before doing so with a house – and hopes to make a single bottling from this vineyard in the future. 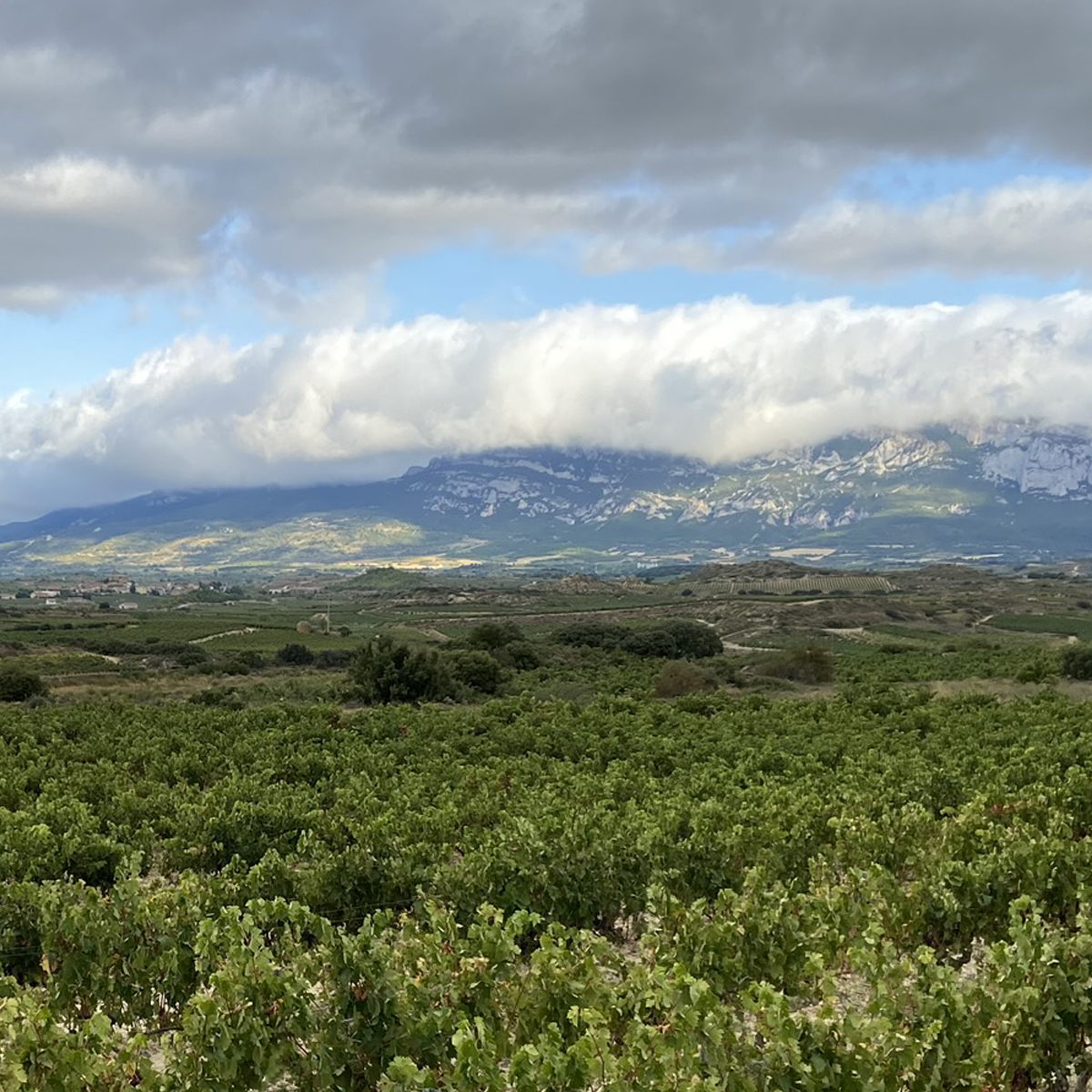 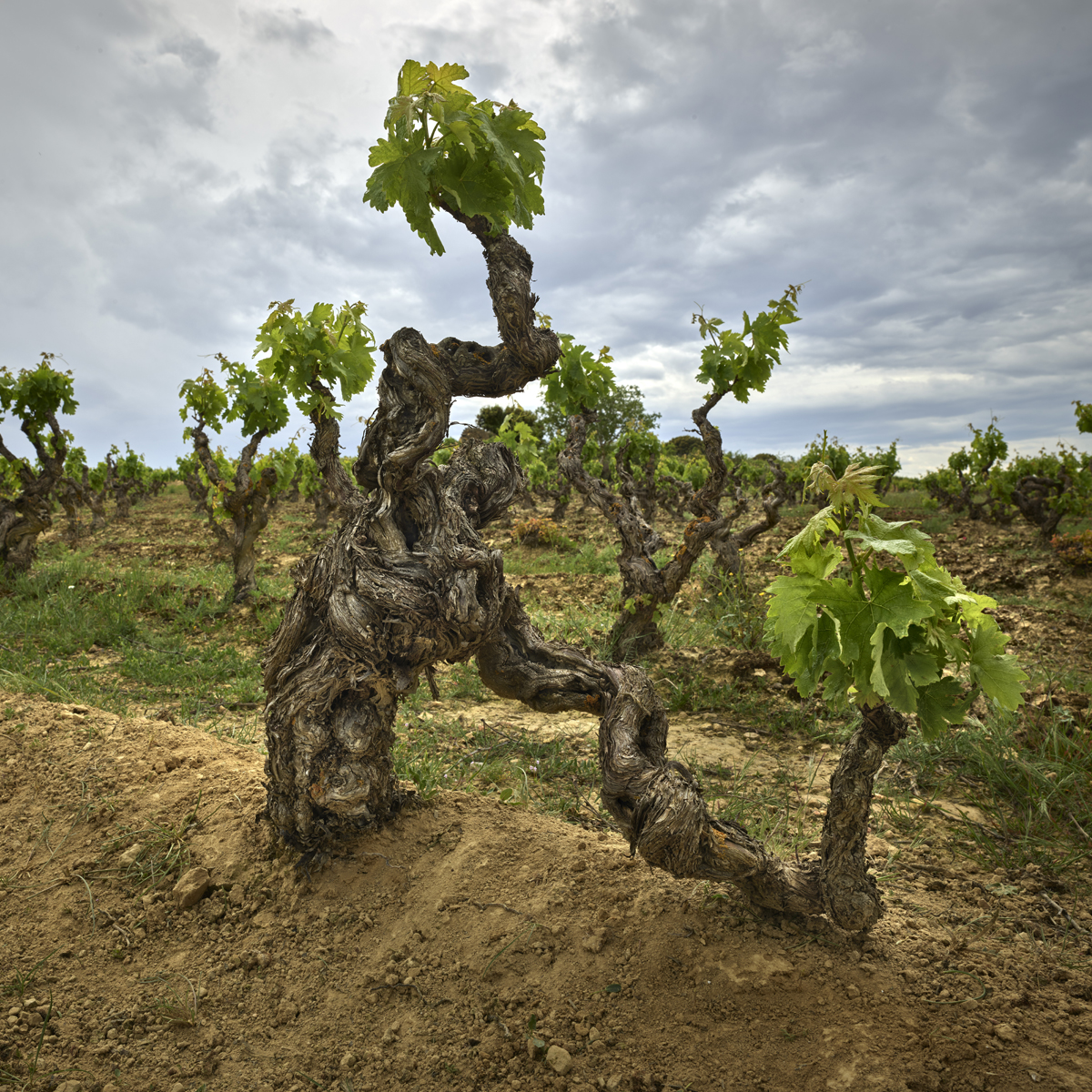 And our last novelty for the moment: a plot in Lanciego, next to the village, planted on a plot known as La Virgen, planted in 1920. It is a vineyard over a hundred years old, somewhat neglected due to urbanization prospects of this plot, which we have been able to rescue from the threat of urban development with a long-term lease and which we are pampering – certain that it has a quality that will make it worthy of being a Viñedo Singular in the near future.