September has been warm overall, with an average temperature in peninsular Spain of 19.7 ⁰C, a value that is 0.5 ⁰C above the average for this month (reference period: 1981-2010). This was the 21st warmest September since the beginning of the series in 1961 and the eighth warmest of the 21st century. Although it was normal or cold in large areas of the centre of the Iberian Peninsula, it was warm or very warm in the rest of the Spanish peninsular territory, becoming extremely warm in coastal areas of the southeast quadrant and in parts of Catalonia, not exempt, as is now usual, from abrupt alterations such as the cold episode of 18-22 (coinciding with the non-festivities, due to Covid-19, of San Mateo).  In the land of the Rioja, the value of the excess can be placed at the national average. 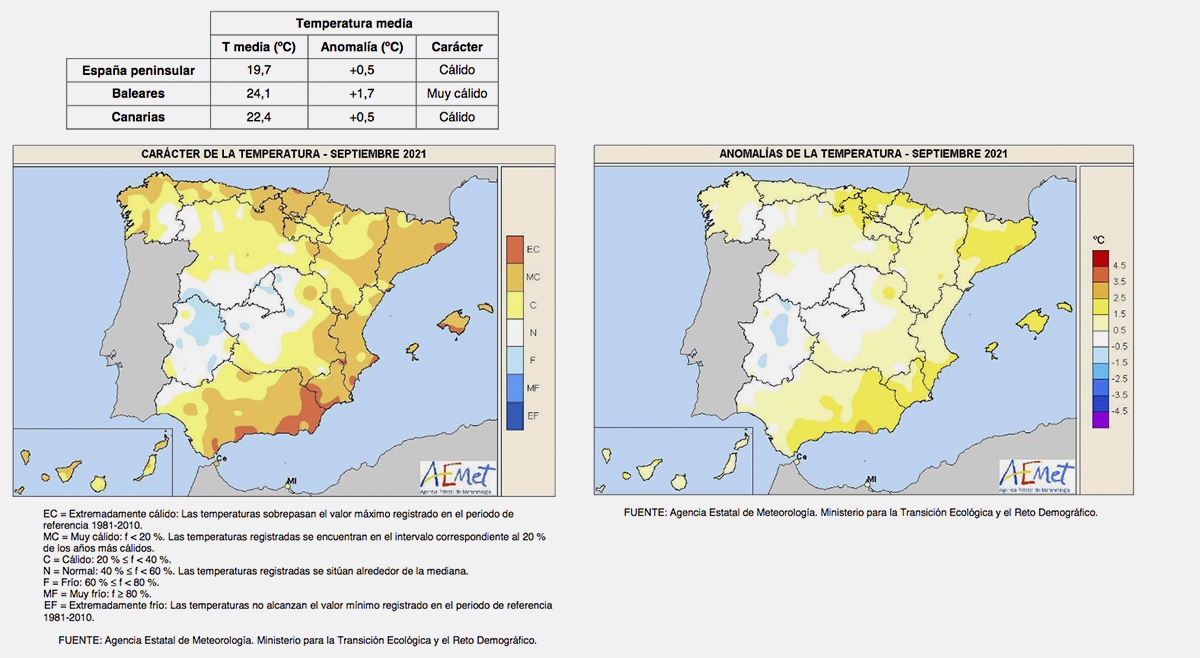 September has been very wet in terms of rainfall, with an average rainfall value over peninsular Spain of 58.8 mm, a value that represents 133 % of the normal value for the month (reference period: 1981-2010). This was the thirteenth wettest September since the beginning of the series in 1961, and the third wettest in the 21st century. However, in the Rioja region, such an increase can only be detected in the eastern area, and with greater intensity the further south and east of the region. In terms of basins, the Ebro basin was slightly wetter than average.

Accumulated insolation during September was more than 10 % below the normal value (reference period 1981-2010) in Asturias, Navarre and northern Castile and Leon. On the other hand, it was more than 10 % above the normal value in the northwest of Andalusia, Melilla and large areas of the Canary Islands. As for wind, in September there were very few and insignificant cases of strong winds, including in the Rioja region.

WINE AND LETTERS (VI) – Roger Scruton “I Drink Therefore I am&...
Scroll to top