When we talk about Rioja wine, we have a problem with location, because we think at first that it is wine produced in La Rioja, as a region or community, which is not exact. Specifically, we must refer to wine produced in the area defined as the Rioja Qualified Designation of Origin (DOC Rioja), produced in accordance with the rules established by its Control Board, and duly qualified as such by the latter. And this area of the DOC Rioja does not coincide geographically with that of the political Community of the name La Rioja, but rather occupies a part of it, the same as it does in other parts, certainly smaller ones, of other provinces, which are Alava, Navarre and Burgos (of the latter only one estate that is truly an enclave within the first), in turn integrated into other differentiated Autonomous Communities.

We have chosen the expression “LA TIERRA DEL RIOJA” (the land of the Rioja) to bring them together. We would like to give you some information, usually taken from our own life experience here, that may interest you about wine and the territory where it is produced. Whenever we talk about “el Rioja”, we will be thinking indistinctly about the qualified wine and the area of the denomination. 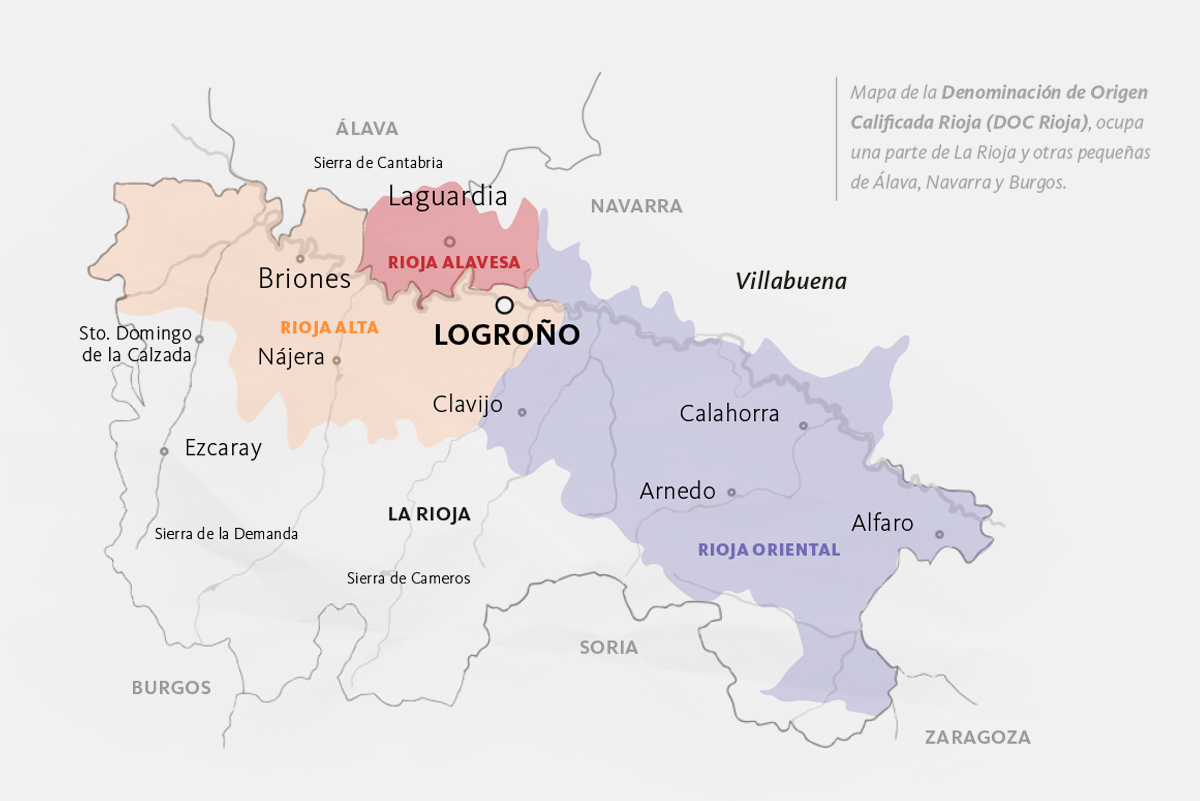 There are three areas in the territory of the Designation that have been commonly distinguished: Rioja Alta, Rioja Baja (the difference is due to the average altitude of the territory, but today the latter has preferred to be known as Oriental or Eastern Rioja) and Rioja Alavesa.

The first comprises the whole of the western part up to the area of Logroño where the eastern part begins; the Alavesa includes, from the northern part of the Ebro river, that area which belongs to Alava (and further proof of the artificiality of the boundaries; we will generally describe it as Sonsierra and treat it as a single area). The truth is that such a generic distinction, or any other surely the same as the one we are going to apply here, is due to the ambiguity of its vague and inaccurate boundaries. Sometimes this is why a Rioja Media (Middle Rioja) is introduced into the distinction. Not even the possibility of its real application as a sub-zone would be truly representative of the variety and richness of the Rioja. Timidly, although already with official recognition, the need and coherence to delimit with more precision and traceability the areas of the land from which the wine comes, and which provide it with its personality, is beginning to emerge: subzone, municipality, estate, unique vineyard (viñedo singular)…

The land of the Rioja is located in an extensive valley marked by the winding course of the Ebro river, which made its way through the mountains in the west, at the point known as Las Conchas de Haro, and retreated placidly and without any obstacles to be overcome in the east, there by the area of Alfaro. 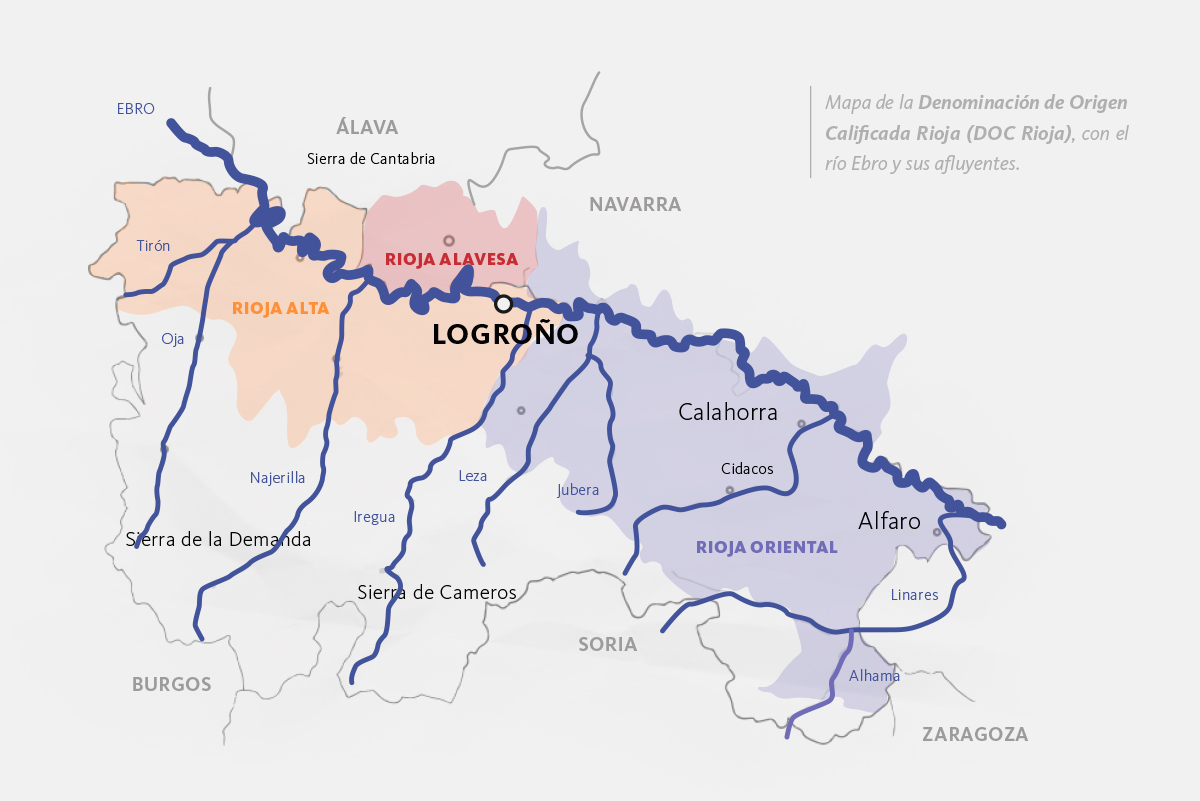 The northern and southern limits of the valley are mountain ranges, of not exaggerated altitude, but of marked personality, personality that they transmit to the climate and the soil. These are, to the north, Obarenes, Montes de Toloño and Sierra de Cantabria (or, by extension, Toloño) and then the Sierra de Aras, and to the south the Sierra de la Demanda, the Cameros and the Sierra de Yerga and de la Hez. The advantage of this parallel chain of heights is that you can enjoy fantastic views of the valley from them. Looking from north to south, we could stop at Cellórigo, at the foot of the Obarenes that our little ones know how to identify with the back of a stegosaurus – in some guides we read that it is known as the “Pulpit of La Rioja”, and the plates on the dinosaur’s back as Peña Lengua, and are identified with stone needles that resemble the Gothic needles of a cathedral; no doubt, ways of seeing that everyone can improve-, in the Peñacerrada pass -in the ascent of which there is precisely a “Balcony of La Rioja”-, or in Lapoblación, climbing the Bernedo pass where is located El León dormido (the Sleeping Lion) -known by the inhabitants there as La Picota, perhaps because to see the lion it is necessary to have as much distance as imagination. Looking from the south to the north, we could perhaps visit the Monte de San Lorenzo (perhaps too high to enjoy the valley), the Castillo de Clavijo, or the Cabi Monteros.

Of course, as we go up to these viewpoints we leave the land of the Rioja behind, but since there is a continuum between plain and mountain, it is not superfluous to include some information about them here; and with the search now for higher, cooler and more humid areas for planting vines, as a result of the changes in the climate, they will become part of the DOC when least expected.

Our intention is to follow the course of the river in the same west-east direction with an eye on the horizon of mountains, as reflected in our imagotype, and to provide data that we think may be of interest to you from any point of view, especially, of course, that related to winemaking. 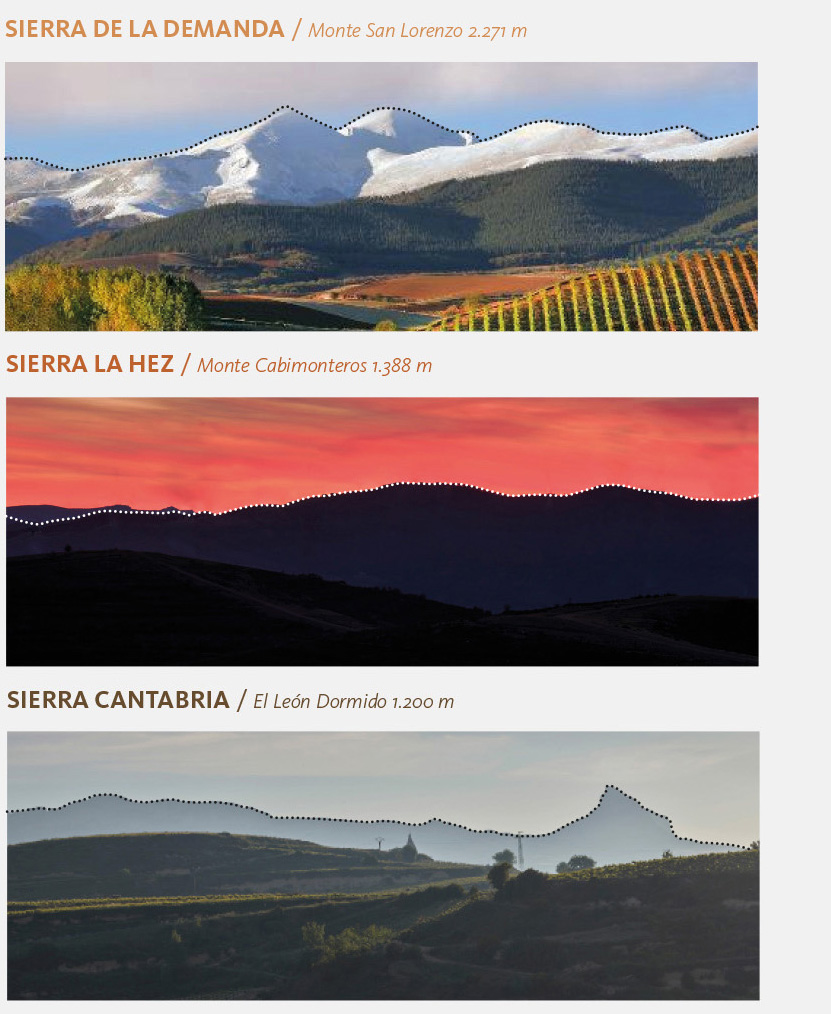 First of all, let us inspect the southern slope of the Ebro river, distinguishing here, more for taking a breath than with a differentiating value, the valleys or basins through which its tributaries flow, namely: Oja (or rather Oja-Tirón) -it seems so easy to say that the river Oja has given its name to La Rioja, that etymologists do not naturally agree-, Najerilla, Iregua, Leza and Jubera, Cidacos and Alhama. Then, at the end, we will cross the river to pass into Navarre and return westwards, first along its banks, and then through the area that we emotionally encompass within the so-called Sonsierra riojana and which, from Logroño onwards, occupies as a continuum spaces in La Rioja and Alava. Furthermore, since we do not find any outstanding tributary rivers to stop us for the respite, we will address these spaces in one go until the exit via Briñas, which they call the portal.

In this way we try to convey to you that what defines such a small space is its diversity. That, in terms of winemaking, it is born from the diversity of soils: ferrous-clay (reddish, with more or less alkalinity, low organic matter…), clay-limestone (whitish), more or less stony, alluvial on the banks of the great river;

from the diversity of climate: which goes from the western Atlantic due to its proximity to the Cantabrian sea, to the eastern Mediterranean because it is already influenced by this sea successively nuanced or aggravated by the altitude in its slope towards the mountains; and today by the irrationality that feeds the climate change and that seems to translate into long periods of drought with violent and excessive inrush of water, exaggerated heat and abrupt peaks of extreme cold and off-season frost; from the diversity of authorised vine varieties and the shape and age of their planting; and also from the landscapes, villages, people…. All this makes the land of la Rioja a unique, singular and diverse “terroir”.

Now, it turns out that our intention is already embodied, since November 2019, in a magnificent book published by Los Aciertos y Pepitas publishers, written by Antonio Remesal and Alberto Gil, with the title: “Rioja. Silent Wines“, and with the subtitle: “A guide to getting to know the other Rioja: the regions, the villages, the vineyards, the wineries, the wines and the people of this surprising wine-growing region”; and what they tell us in 311 pages, we cannot pretend to summarise in this booklet. So what we want to do is to inform you about its existence and to assure you that it is of paramount interest for the knowledge of Rioja -the authors, excluding the definite article “La”, solve the problem of location-, and essential if you are one of the “good people” of whom Antonio Machado said: “where there is wine, they drink wine” -if there is no wine, they will have to make do with “fresh water”-, and thus you get on the move to satisfy that primordial need.

Here, therefore, we intend to be intrinsically subjective because we will only talk about what we have experienced. We will not be partial, nor impartial, because we will not make comparisons, but in no case shall we be arbitrary. I do not think we will be referring to any place that you cannot already find in the standard guides. Naturally, we tend to go to restaurants where we can drink MacRobert & Canals wines, but this is not always possible. There is no more complicated place to sell Rioja than the land of the Rioja. Here there are ‘special obligations’: there is no restaurateur who does not have a father, son, brother, brother-in-law, nephew, friend, or parishioner who in one way or another has no interest in a certain wine, if not the restaurateur himself.

VINEYARDS AND WINE: Biodiversity in the land of Rioja (I)
Scroll to top