The D.O.Ca Rioja is one of the most important wine regions in the world. As a D.O. it was established in Spain in 1925, and was awarded the category of “Calificada” (qualified) – the only one to date – in 1991.

The D.O.Ca Rioja is a great valley that occupies about 150 square kilometres from east to west and 60 from north to south, distant another 100, in the north, from the Atlantic Ocean, surrounded by mountains to the north and south, crossed by a majestic river, the Ebro, of which another seven smaller rivers are tributaries, forming an equal number of valleys.

What characterises the Rioja, then, is its diversity of soils – clayey, limestone, ferruginous clay, alluvial… -; of crop heights – from 400 to 800 metres approximately, and rising -; of climates – Atlantic in the west, Mediterranean in the east; and of grape varieties – up to 40 different varieties have been counted, and although today there are far fewer of them recognised by the D.O.Ca., some of them are still present in the oldest vineyards. An expression of this diversity was the traditional way of making wines, with blends of varieties not only from within the vineyard itself, but also from different areas and sub-areas. In modern times, as new plantations have been planted, it has been possible to pay more attention to varietal wines.

Diversity of people too. Four autonomous communities participate in the designation. A hospitable land that today welcomes Bryan as it has welcomed so many in the past. All this encourages our spirit: tradition is diversity.

My earliest childhood memories are of running barefoot in a village in the Swartland region of South Africa – about fifty kilometres north of Cape Town. 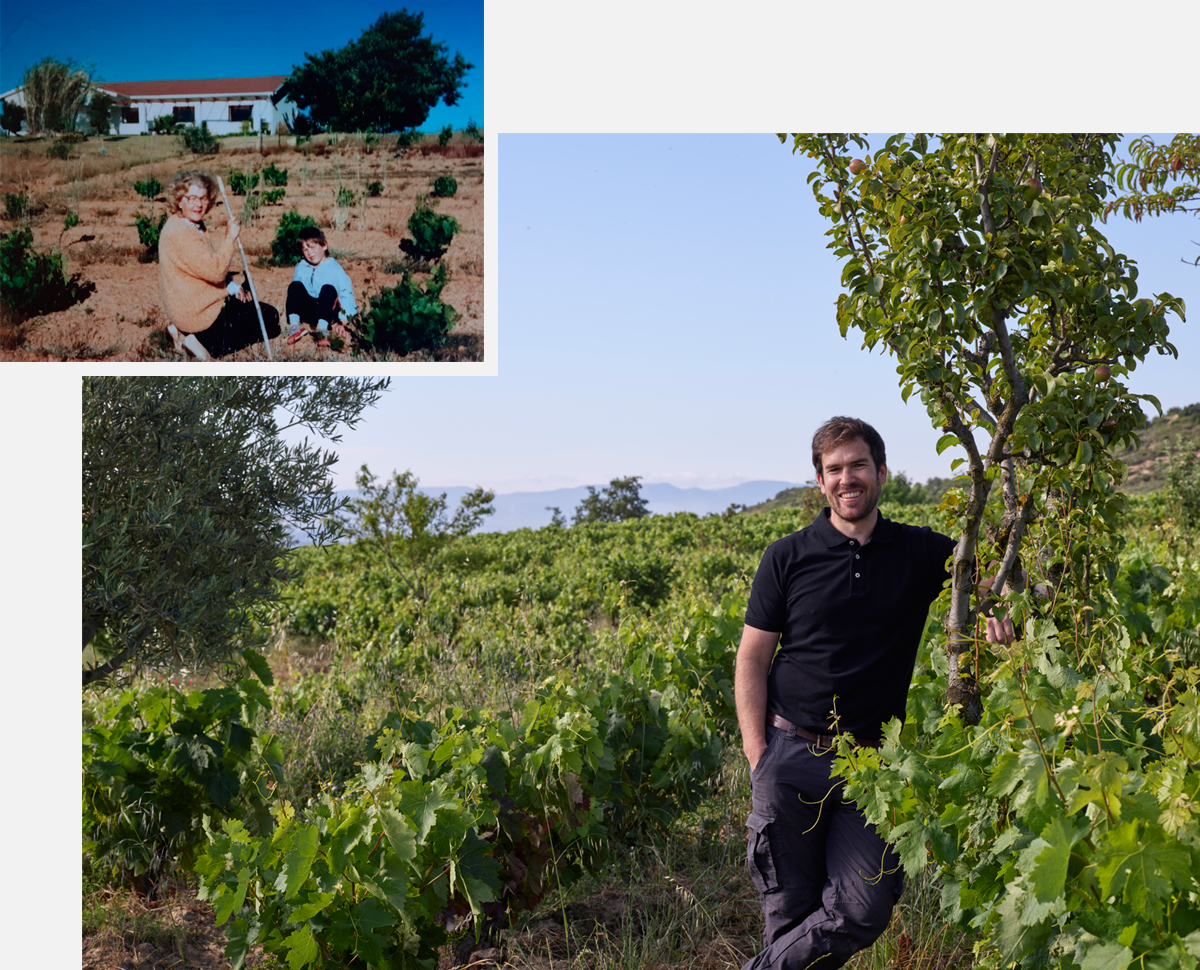 Because, if you look closely, it all goes back many years, almost as far as my years.  My earliest childhood memories are of running barefoot in a village in the Swartland region of South Africa – about fifty kilometres north of Cape Town where I was born – amongst the farmland vineyards that my parents used to and still own. I remember the contact of my bare feet with the earth and I think that is where my love for it and my passion to understand it began. It was there that I learned to cultivate the vineyards and make my first wines, while studying Viticulture and Enology at the University of Stellenbosch. After graduating, I spent several years travelling between Spain and South Africa, working in the Priorat and Swartland wine regions, areas of small plots of old bush-trained /goblet-trained vines and without irrigation. These are fixations that I keep in order to obtain wines of the quality and personality that I dream of.

Even then, and completely unaware of what time had in store for me, I had fallen in love with wines, the fine wines of La Rioja, very special wines with a terroir that I could not locate at the time.

Maybe one thing led to another, the fact is that I also fell in love with a girl, also an oenologist and a traveller, whose parents lived in La Rioja where, so as not to tire you out with the story, we decided to settle down in the year… Clara, my wife, found a job with a well-known wine group – “if we are going to work in the world of wine, one of us must have a salary”-, because it was difficult for me to find a job; and it was precisely from this difficulty that MACROBERT & CANALS was born, as an adventure, from which we expected good fortune, the dream not only of finding a way of life in my case, but of building something that would bring value to society that we could be proud of.

We have chosen the mountains as the image of our winery.

The mountains convey ideas of ascent, verticality and solidity; of mass.

Besides, those chosen also express our idea of diversity, biodiversity,

which we understand to be a tradition in Rioja.

At the base is Table Mountain. It is the base not so much because it is the lowest mountain and because it is literally at the table where our work is especially appreciated, but because being the iconic image of Cape Town sends us back to Bryan MacRobert, the soul of our project, who always had it in sight in the years when his passion for wine was developing in the family farm there at the southern edge of the southern hemisphere.

The other three form mountain ranges that give an idea of the diversity of Rioja: they embrace four different political communities and account for the different climates, soils and vines that give variety to our wines.

In ascending order, firstly the Sierra de Cantabria, which marks the northern boundary of the Rioja. We have chosen a profile that can be seen from properties that we cultivate in the Rioja Alavesa, in which El León dormido (The sleeping lion) stands out, and is also the closest reference to the city of Logroño in which we live.

Next is the profile of the Sierra de la Hez which marks the southern limit of the eastern part of the Rioja, taken from the Tudelilla vineyard which supplies us with that very special garnacha.

And the highest, the Sierra de la Demanda, where the Monte de San Lorenzo (Mount San Lorenzo) rises up, the totem of the Rioja, the southern limit of its western part and perceptible almost from any point of our vineyards in the area, including the Rioja Alavesa. The mountains are defined by colours that can be as changeable as life itself, and enclosed in a circle that seeks to indicate the sum of hemispheres that our names express, but which does not close completely because it opens up to new expectations and horizons. Perhaps you can imagine the glass and feel the land of the wine that is drunk from it. Two notes of colour, perhaps the sun, perhaps the moon, which mark our rhythms, complete the perspective