According to the usual summary of the month’s weather published by the AEMET, (State Meteorological Agency), March 2021 was the fourth driest March since the beginning of the series in 1961 and the driest of the 21st century, with the aggravating factor that the month was wet or very wet in the southeast of the peninsula and in the Balearic Islands, so that the dryness was proportionally more intense in the rest of the peninsular territory and in the Canary Islands. In the Rioja region, the average rainfall was 50% higher than in the reference period 1981 – 2010. 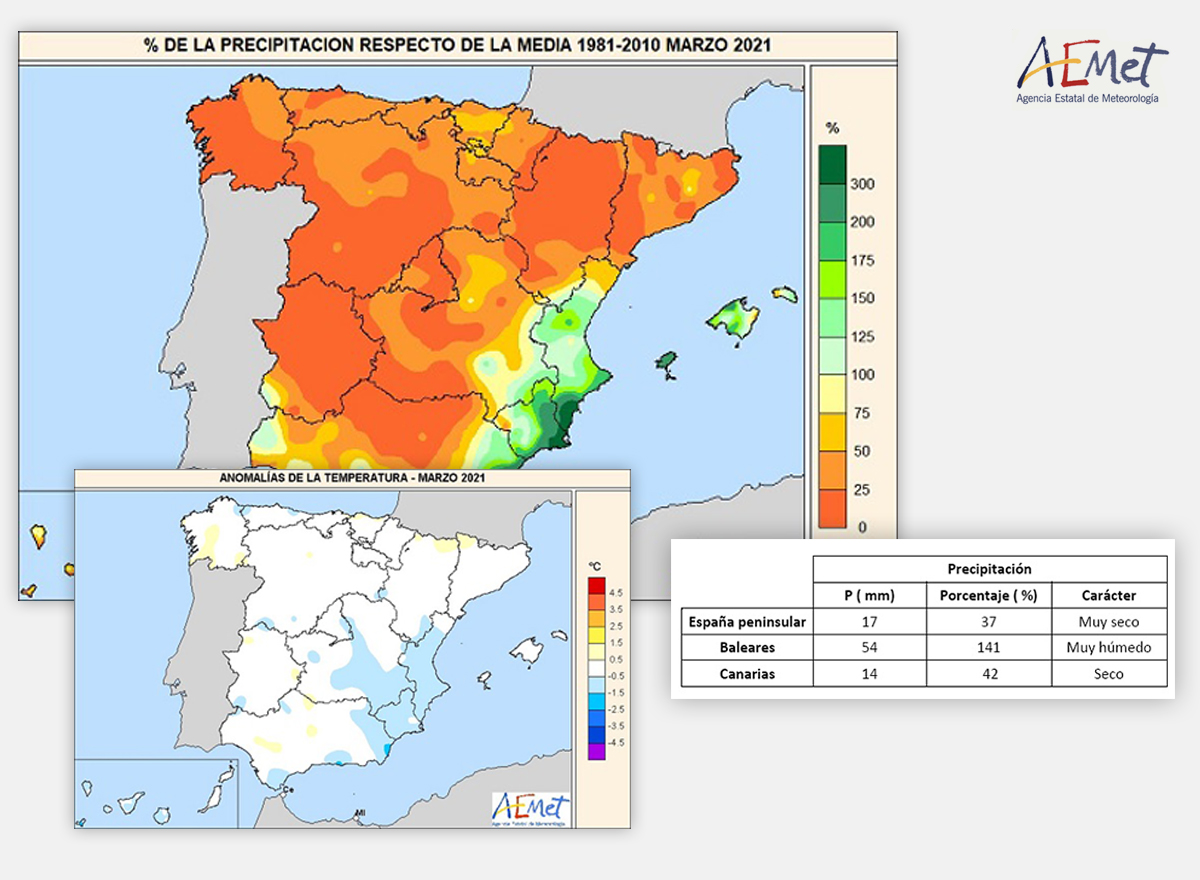 In terms of temperatures, March was on the whole a normal month, with an average temperature in mainland Spain of 9.9 degrees Celsius, 0.1 above the average for the month for that period. From the 23rd to the end of the month a particularly warm spell was observed with temperatures well above normal, reaching, on the last day of the month, over 30 degrees Celsius in areas of Extremadura and Andalusia and in some parts of the Cantabrian Sea. Overall, this was the 22nd warmest March since the series began in 1961 and the 11th warmest of the 21st century. However, except for this final period, it was cold or very cold in the southeast quadrant of the peninsula, and normal or warm in the rest of the Spanish peninsula. In the Rioja region, depending on the area, it could even reach an increase of 0.2 degrees Celsius.

In March we completed the work we had started in previous months. 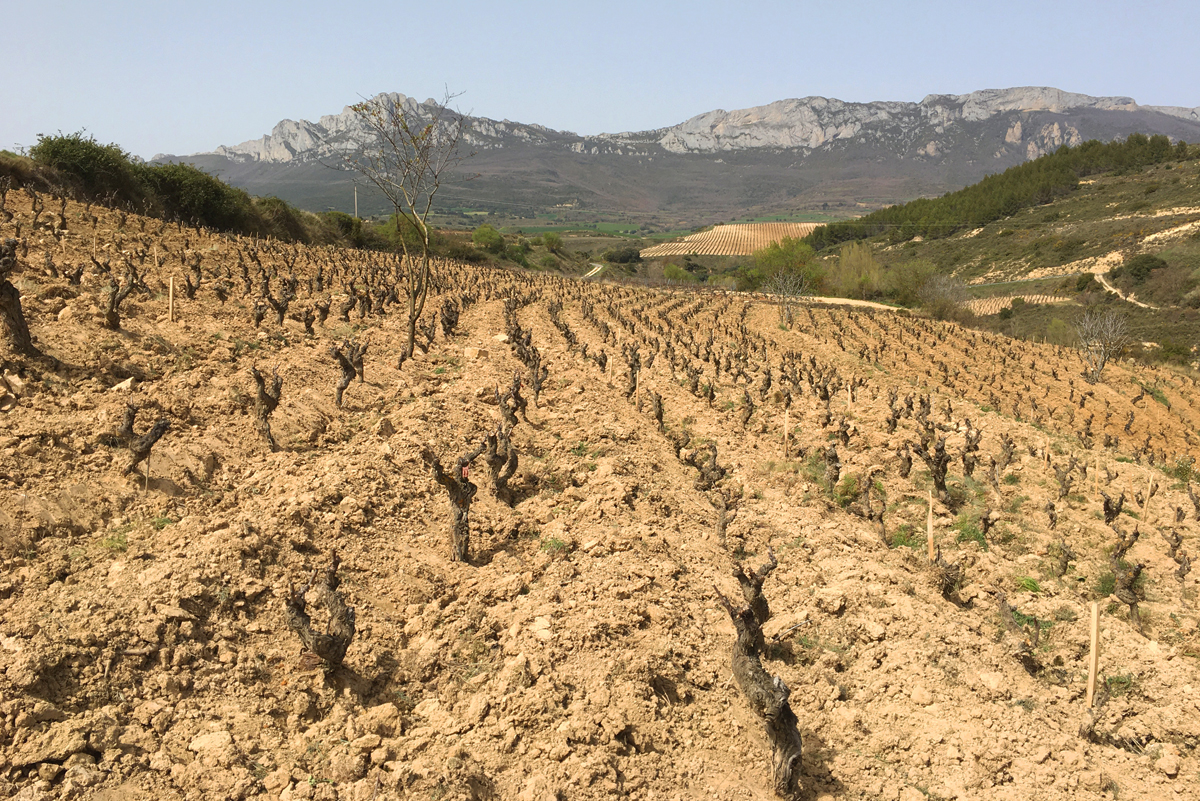 On the one hand, once the vine shoots had been saved for gastronomic use, we proceeded to burn the remains of the wood left by the winter pruning. This is the most effective way to disinfect the vineyards and reduce (drastically) the number of spores of various micro-organisms that live in the dead wood and can infect the vines during the growing season. We like to do this work towards the end of winter and just before spring, when the days have already started to warm up and dry out the wood. (This work is also subject to administrative control).

The second major task to be completed was the clearing of weeds and weed control. You already know that we opt for exclusively mechanical means for this work in our vineyards, without the use of herbicides, and you know the advantages of all kinds that this entails, both from a health and ecological point of view and in terms of improving the quality of the vine and its product.

Since most of the work was done in February, we can now complete the information with data that may be of interest to you.

First of all, a plough called a “forcate” in the land of the Rioja is used, which is recognised as such in the DRAE (Spanish Royal Academy Dictionary): “A plough with two shafts to be pulled by a single horse”. By means of this plough, which contains a pointed plane about 30 cm long and 15 cm wide capable of greater pressure when introduced into the soil, we make criss-cross furrows in the soil, to eliminate weeds and facilitate water penetration with minimum erosion. 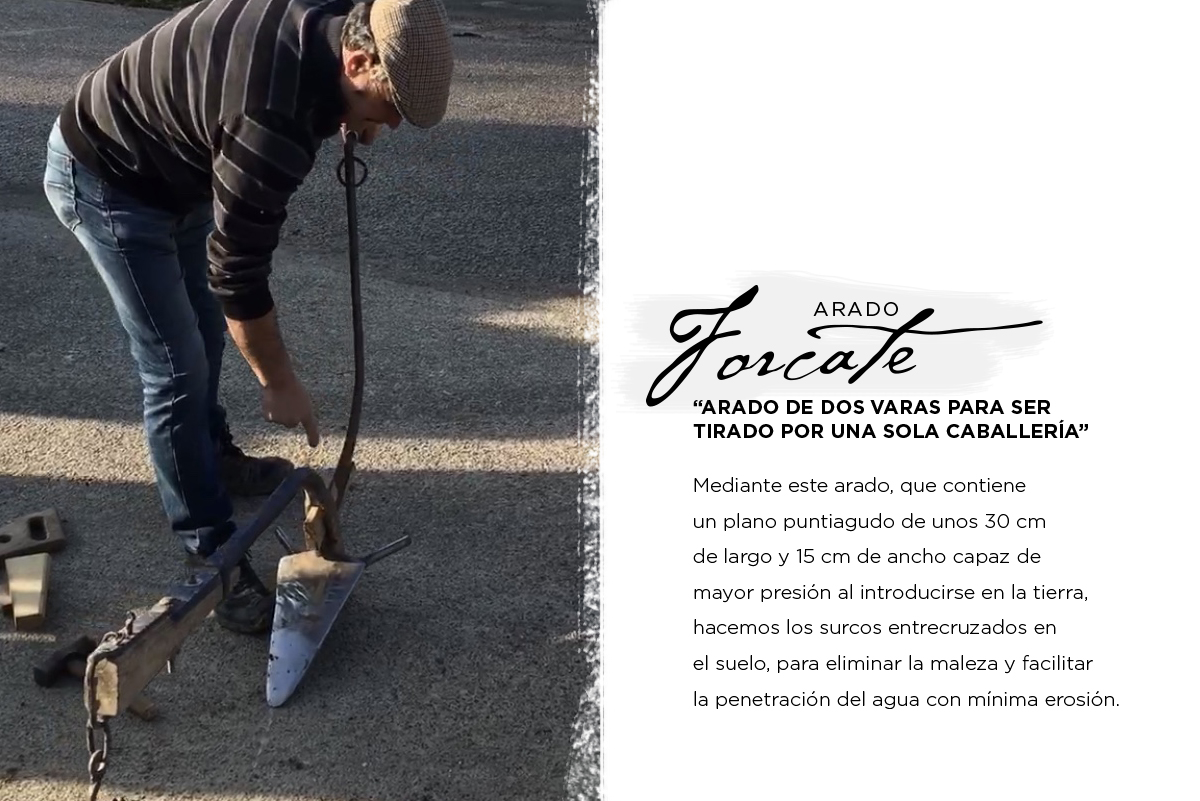 This prepares the soil for the subsequent use of a special mouldboard plough. A mouldboard plough is any plough that allows the furrowed soil to be turned over by “pouring” it to one side or the other. This peculiar plough, known as “borracho” (drunkard) in the land of the Rioja, has a sort of step on one side or the other that allows the operator to wind between the vines, moving towards and away from them, uncovering the base of the soil and throwing it towards the centre of the so-called renque, i.e. the space between the rows. Bryan suggests that its name comes from the zigzagging movement that the plough has to make around the vines. Then we see that WikiRioja defines it as follows: “Two-handled mouldboard plough with a guide wheel, which was used to dig around (“desacollar”) the vines without damaging the trunk, the name comes from the difficulty the vine grower has in handling it, as it goes all over the place, like a drunkard, and can break many vines”. 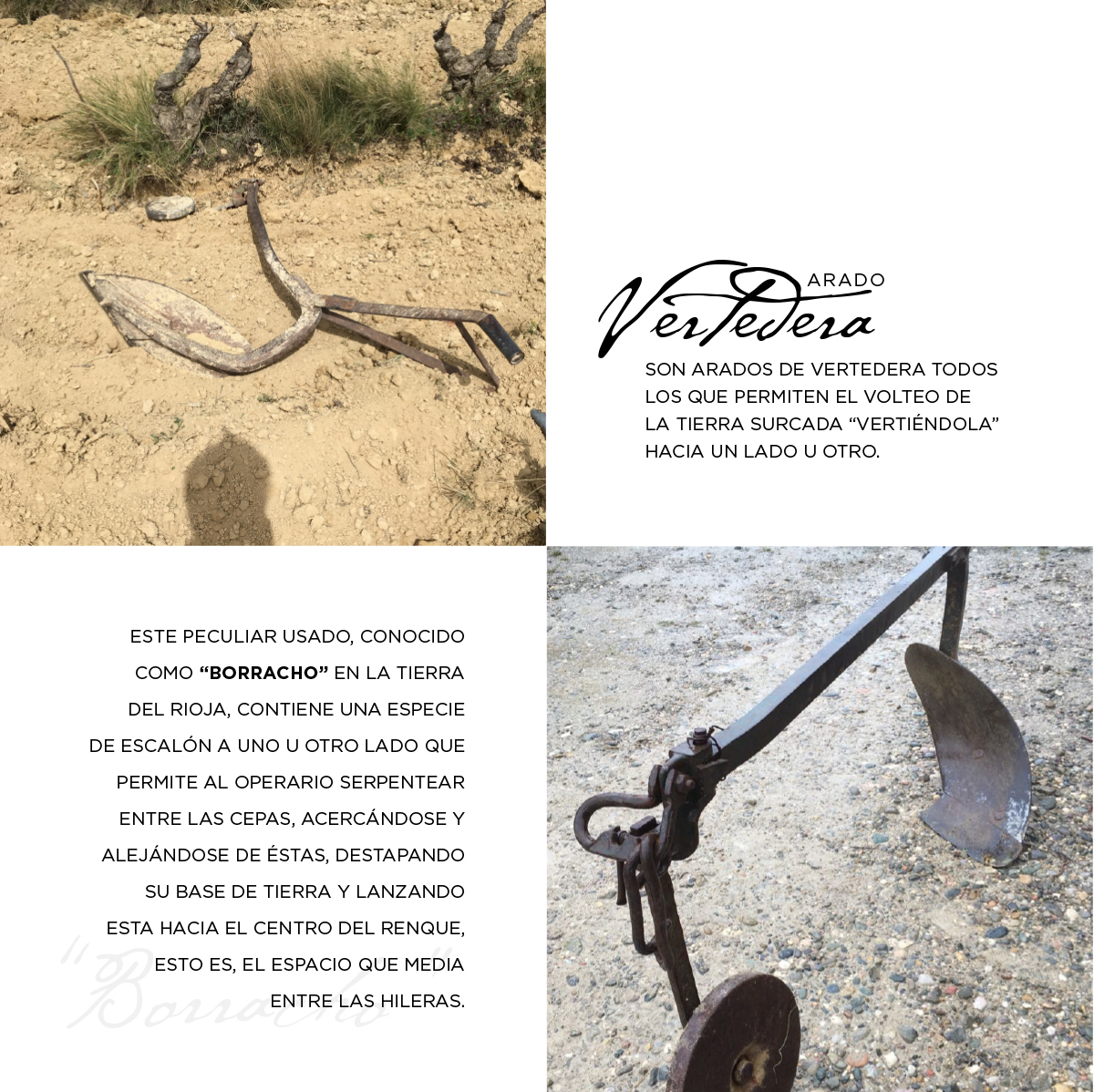 (“Desacollar”, in case you are fond of the Alphabet Game –TV contest known as Pasapalabra, in Spain-, is also a local word accepted by the DRAE: “To dig around the vines, leaving them a hole in which the water stops”).

And so the soil is finally prepared for what has been the real work of March. The cleaning around the trunk of the vine, which the ‘borracho’ obviously cannot complete with total cleanliness. For this purpose, the hoe that everyone knows is used, obviously a small hoe adapted to the task. Hoeing is a manual job that few farmers do, as it is exhausting; one person can cover little more than 1000 m2 of vineyard in a day. Another advantage of clearing the trunk of soil and preventing water from reaching it is that it stops the formation of fine hairy roots at the junction of the graft and the base of the vine. In this way the vine is forced to send its roots downwards in search of water and nutrients. We are now entering spring, therefore in the phase of root growth, and it is very beneficial for the roots to go deeper, considering the time when, due to the lack of rain, there is a shortage of surface water resources. 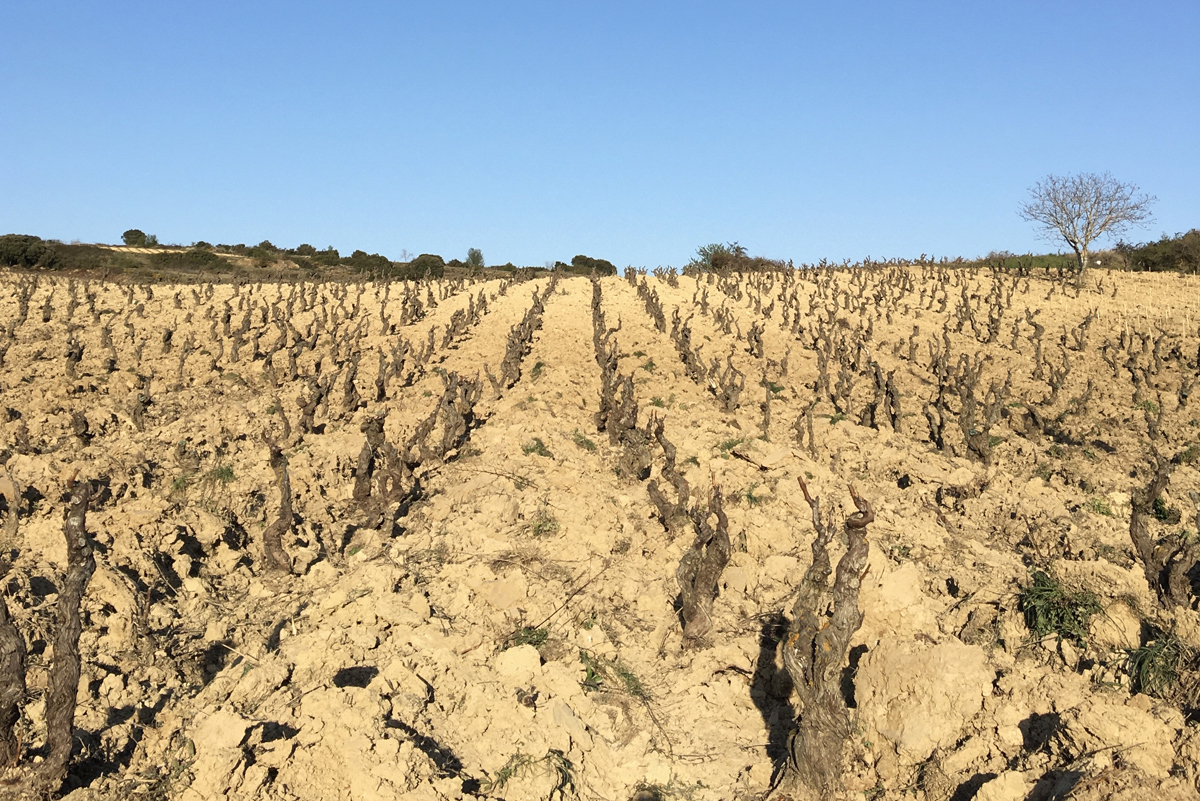 WINE AND LETTERS (II).- Ferrán Centelles Which wine with this duck?

CLIMATE AND WORK IN THE VINEYARD (IV): The Land of Rioja / April 2021
Scroll to top