The book we are dealing with in this issue of Wine and Letters is entitled: “FALSE MYTHS AND TRUE LEGENDS OF THE WORLD OF WINE”. Its author is Antonio Tomás Palacios García, Winemaker and Doctor in Biology, published by AMV Ediciones, in its second edition of 2018. 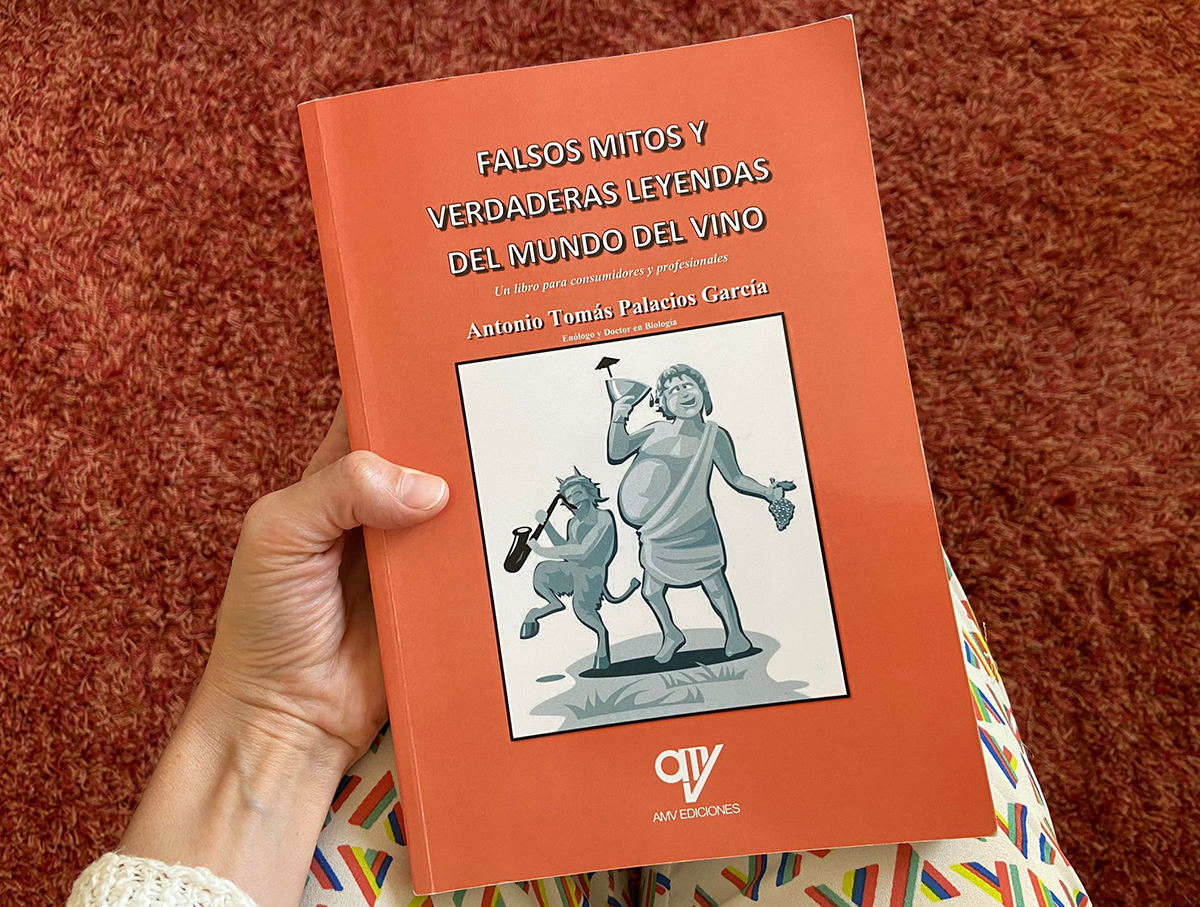 The book we are dealing with in this issue of Wine and Letters is entitled: “FALSE MYTHS AND TRUE LEGENDS OF THE WORLD OF WINE”. Its author is Antonio Tomás Palacios García, Winemaker and Doctor in Biology, published by AMV Ediciones, in its second edition of 2018.

The author is very well known in the wine world, not for nothing. Apart from the studies mentioned in the preceding paragraph, he is well versed in all areas, from winemaking by land and its air, by sea and its sea bed (sic, just as it sounds), through research, chemical and microbiological analysis, to teaching both as a university lecturer and as a trainer in private companies. And although it is not mentioned on the back cover of the book, he is very much at ease, perhaps I should say experienced, in the field of marketing. 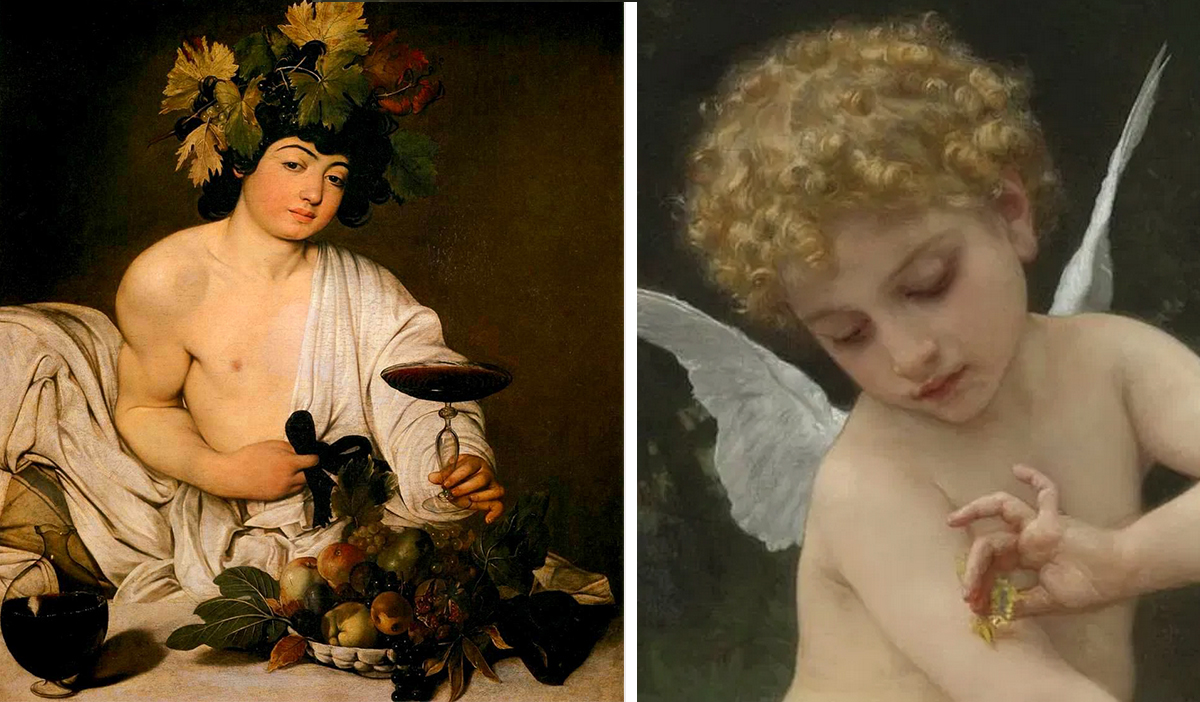 Obviously, we cannot pretend here to summarise the content of each of these forty-one points, however succinctly. The issues dealt with in them will be of interest to all wine lovers. Nature and man in winemaking, sediments and filtration, oxygenation, ageing, smell and tasting, definition and verbiage, ecology and fraud, enjoyment of wine and “superfluities” (as Manolito, Mafalda’s friend, would say), winemaking science and homeopathy, healthy and dreamed-of effects of wine, price and value, “terroir” and mineral perception, pairings, ageing… 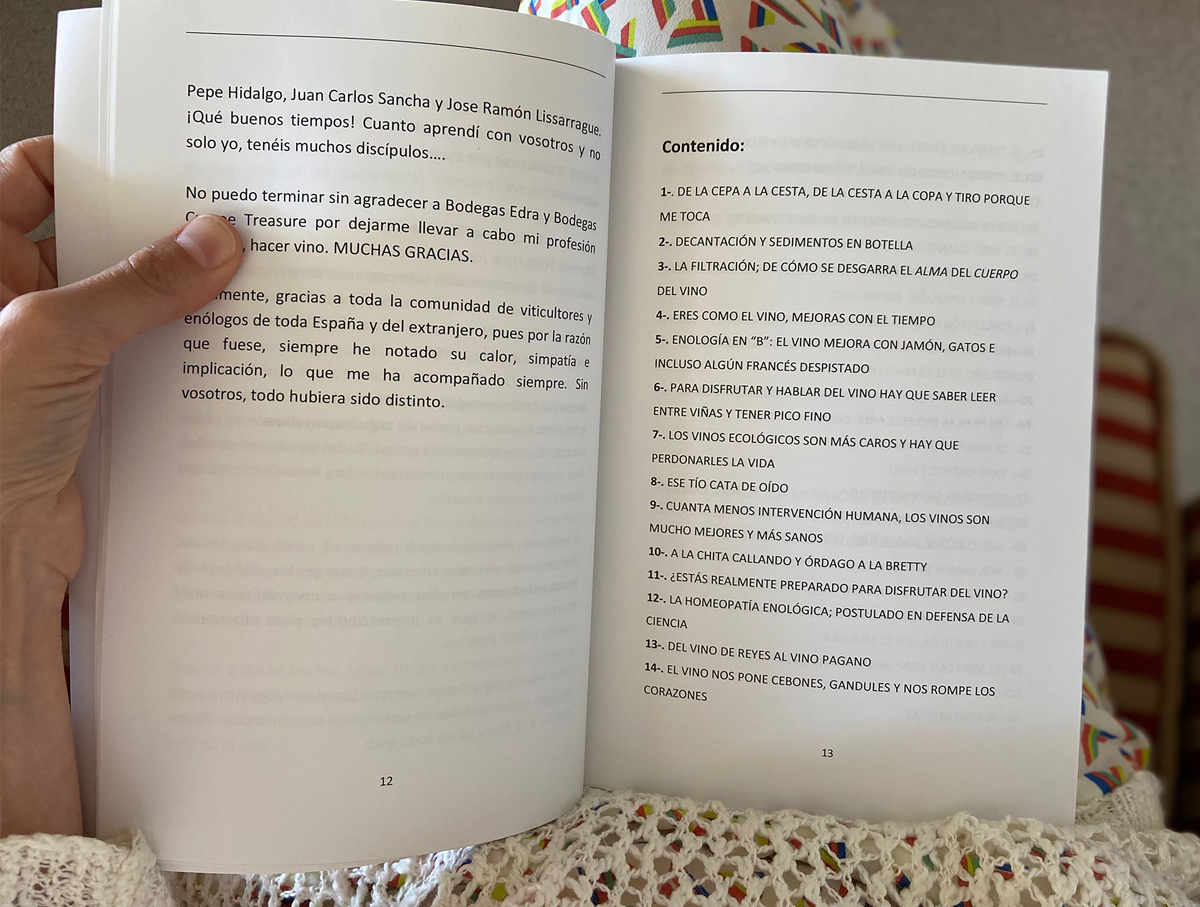 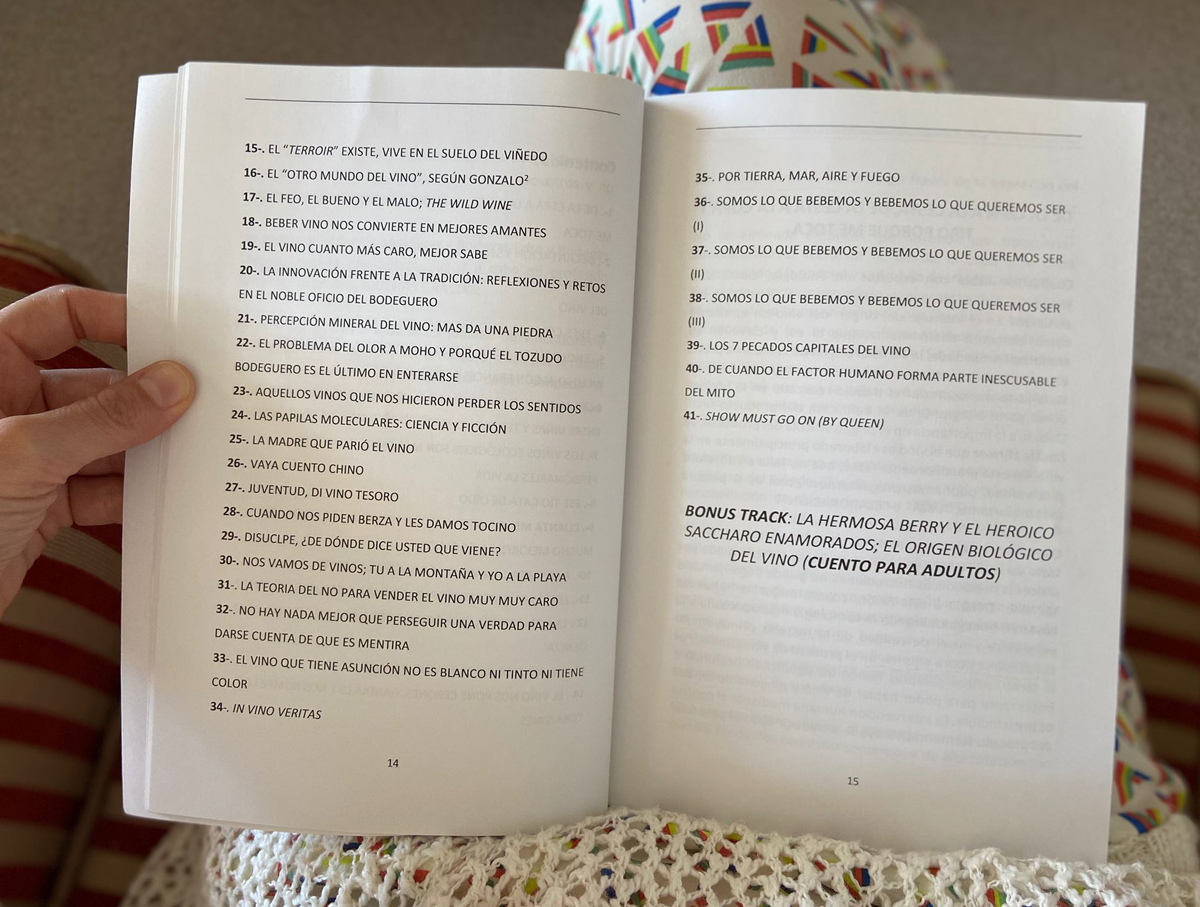 The author delivers what he promises: he debunks myths and affirms truths with scientific belligerence and unbridled passion for his work and its results. Some of that passion rubs off on us – long live wine! Although he warns us against romanticism. The market is the market, and if it does not enter the market, the winery is not a winery, or will soon cease to be one.

The book’s teachings could be condensed into the following axiom: respect man as much as you respect nature. He finds profound incongruity in asserting that the more nature acts and the less man works the better the wine, whereas the natural destiny of grapes without human intervention is to die in the form of vinegar. 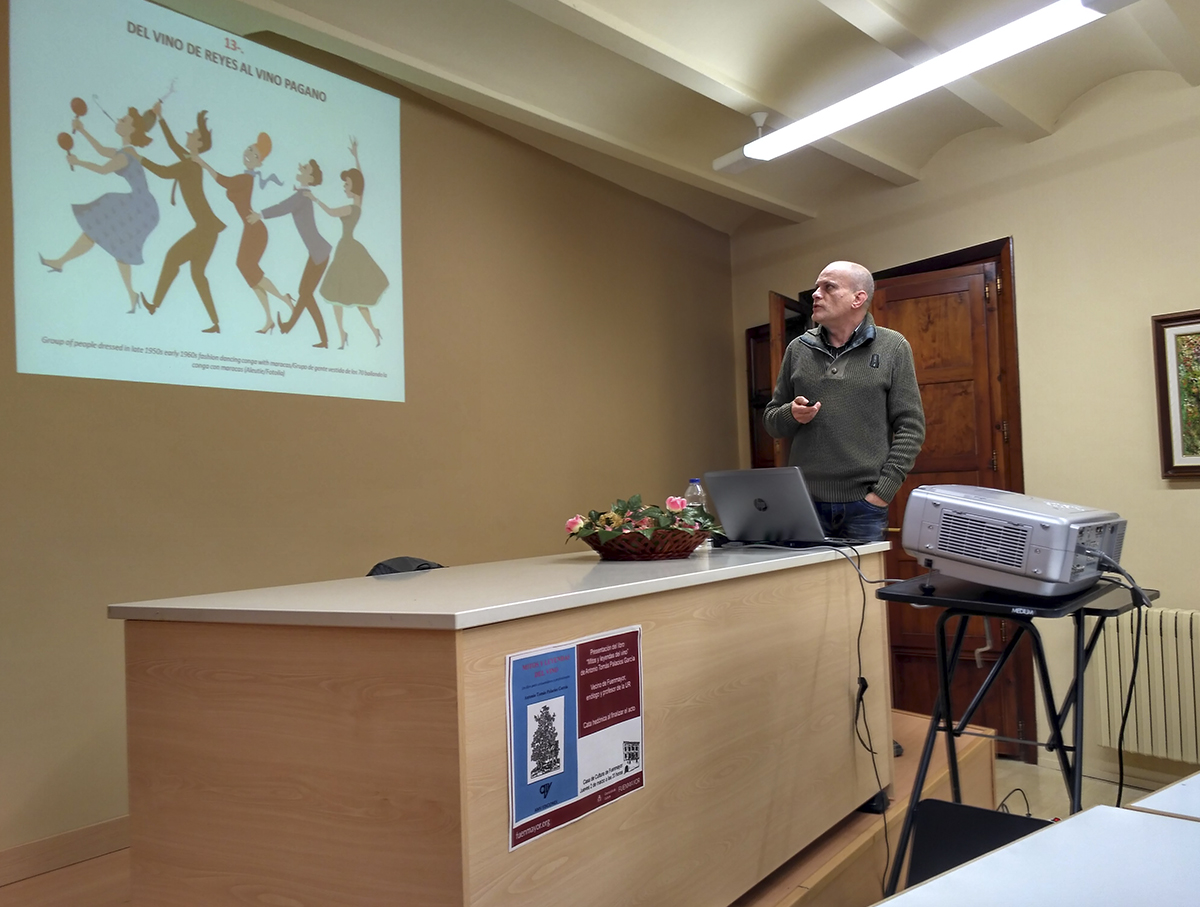 From the very first pages, it is argued that it is “human intervention” in the vineyard and later in the winemaking process (winery) that determines the quality, personality and differentiation of the final result. In this effort, it must meet the demands of consumers, and therefore the fashions dictated by prescribers, which only technology and scientific innovation are capable of following. We can perhaps here raise our eyebrows in a questioning gesture. Pages later, after addressing the issues of decanting, sediment and filtration, he concludes that the winery’s technical decisions to maintain the sensory integrity of the wine should not depend on fashions or trends, but on the chemical and microbiological knowledge of the product. Contradiction? I don’t think so, I would rather say balance, proportion, fair measure, respect… (One reads about practices such as this kind of molecular deconstruction/reconstruction of the must through a process of reverse osmosis, and one cannot help thinking once again that nothing good can come out of “perfectionism”, no matter how many points it gets). 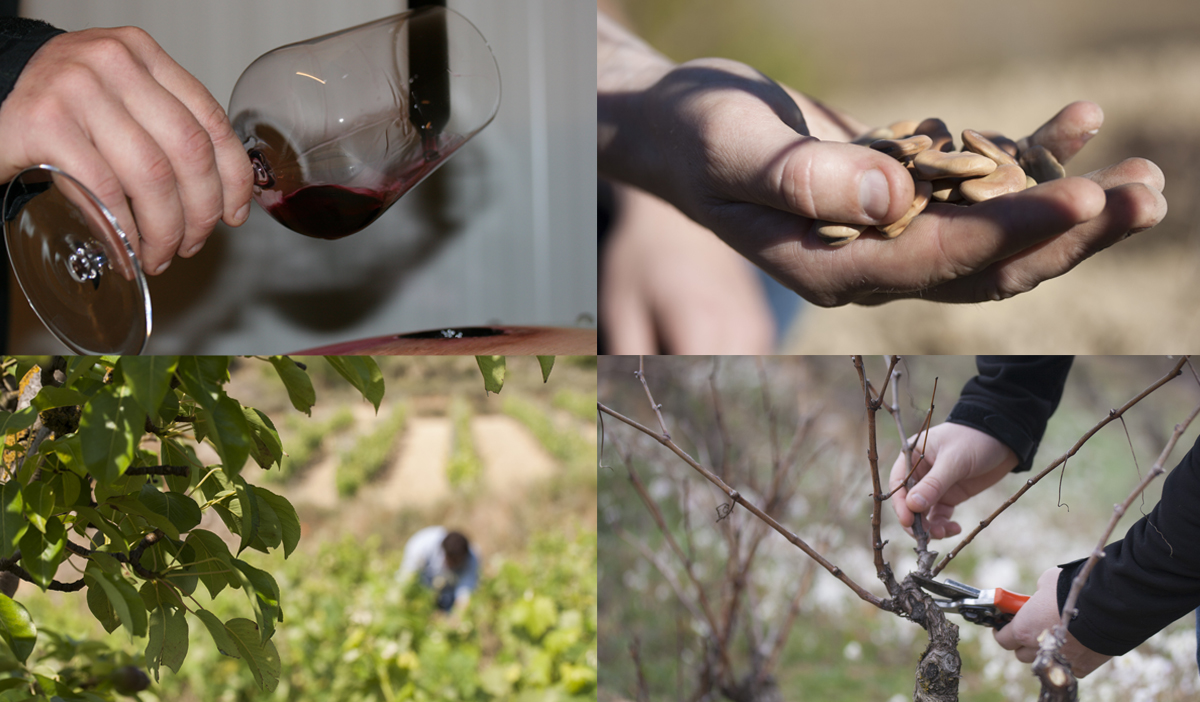 This same scientific vocation is reaffirmed later on; a firm commitment to environmentalism should not exclude technological modernity, rejecting what he describes as ravings, such as homeopathy in winemaking, or the use of cosmic energy or esotericism; we will not enter into the debate here and now, we limit ourselves to sharing the assumption that the fact that a wine is defined as natural does not imply that it is good. It also combines “terroir” with winemaking technique, and tradition with technological innovation…

In short, three hundred and thirty-one pages of love for a job well done and well founded, which will contribute to increase your winemaking culture, therefore your resources to appreciate the “nature” of wines, and ultimately your desire to put that culture into practice, which is what really matters: to drink wine always in a balanced way and in the best of company (both personal and nutritional).

CLIMATE AND WORK IN THE VINEYARD (VI): The land of Rioja / June 2021
Scroll to top